Why do we do this?

Amandalyn and I began our lives together on a small farm I (Mackay) bought before we were a couple. I wasn't really certain what I wanted to do with everything at the time but I new there was some calling that would fulfill me. As we dated and eventually married, we noticed Amandalyn's Crohn's began going into remission, with the only objective change being her diet. She was eating healthy and cutting some of the factory products she so loved... Try and snatch a Twinkie from her hands and you'll pull back a stump!

We knew we wanted to raise livestock and desired a certain amount of self sufficiency and a farm upbringing for our three kids. I grew up on a small hobby farm in Idaho but had never raised commercial livestock. I was fairly familiar with the animal basics but in the end it turns out I had a lot to learn about fencing, husbandry, care, medicine, the works. One day watching YouTube videos, we found these two crazy farmers doing everything different. Enter Joel Salatin and Greg Judy to our lives. As we learned more and more about soil health, animal care and as Salatin says "the pigness of the pig" we realized in order to honor God, His animals and land, while providing healthy natural meat AND raise livestock with a sense of dignity, we had to do something different.

And so our journey began and not once have we looked back and wished things were different. We've seen our share of mistakes but never imagined a different path. My hot city girl wife is intently reading a farming book right next to me and I don't think I could get it out of her hands... not even with a Twinkie. 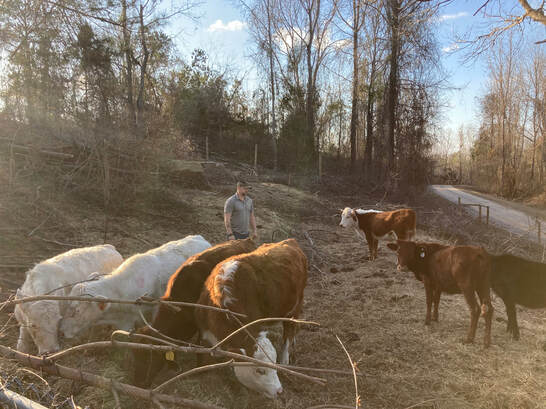 Often we get asked about our process for beef. To be clear, anyone is allowed to come out and see our farm before purchasing so you can see the way we raise animals. Our cows are allowed to be cows. They are rotated on fresh pastures, given shade to get out of the sun, and supplied with endless fresh clean water. But most importantly, they are not laden and overloaded with chemicals, They do not eat dead cows (as is the case with feedlot beef) and they are never fed a chicken manure slurry. They eat what grows naturally on pasture with no chemical fertilizer, herbicides or pesticides.

We do not chemically worm or vaccinate our cows. They will receive an antibiotic if they get sick which is unusual but it is never given on a regular basis. Occasionally they may receive antibiotics upon arrival to our farm if they are showing signs of shipping fever. They receive a mineral supplement of ground seaweed (kelp), Himalayan  salt, and Diatomaceous earth to act as a natural wormer.

They are fed hay and the natural salad bar available to them from pasture to pasture. We cannot control what happens to cows before they come to us and they may have received traditional treatment. But once we get them, they begin their life healthy and happy on clean pasture, with natural minerals and no toxins. We even use free-ranging chickens for fly control!

What is different about our pigs? First, they will never see the inside of a Confined Area Feeding Operation or CAFO. For those that don't know, these are areas so horrible the pig is grown their entire lives with a group of 6 or 8 in an area the size of a walk in closet. The floor is a steel grate where the pigs manure passes through to a slurry and the animals tails have to be cut off to help keep fighting down. They are pumped full of antibiotics and vaccines because a large majority of them would naturally die without the chemical help.

The manure from these areas could be a valuable byproduct and repurposed into clean organic fertilizer to local pastures. Instead it is used to fill giant cesspools stripping the land of nutrients and adding back a toxic sludge that at best is contributing to the natural surface erosion of the earths topsoil and is likely leading to potentially more damaging results to the ecology.

Cows, pigs, chickens, and all manner of livestock are raised in these horrible conditions. As a scientifically advanced society, we have been so wrapped up with the notion of 'could we do it' that we have forgotten to ask 'should we do it'... CAFO's animals are often fed additives to their corn base. These additives include chicken feathers, cement dust, newspaper, manure, dead animals from the operation, slaughter house entrails and the list can go on but these are a few of the more disgusting ones. It seems bad enough to feed dead cows to omnivores like pigs and chickens but its even fed back to the cows! Mad Cow Disease anyone?

The bottom line, we want our pigs to be pigs. They should be on pasture and forest converting land to beautiful grassland by rooting their noses into the soil looking for grubs, nuts and grasses that they enjoy. We don't have to load them with chemicals because their areas are rotated around and the pigs do not live in their own filth. If we smell manure on our farm, we recognize it immediately as a problem because it means we have left an animal in an area too long and it's time to rotate them onto fresh land. As Joel Salatin says "You are smelling mismanagement."

Conversely, a feeding operation identifies the same problem and just installs a bigger fan. The animal is still allowed to wallow in its own filth and it is simply just given a chemical cocktail to fight off disease. We understand at the end of the day these animals are going to be killed for their meat in both operations, but we simply want to allow the pig to be a pig and care for it as stewards of its life prior. Animals deserve to have the opportunity to thrive, see the sun, feel the breeze, move at will under the brush and trees and have companionship without the confines of inhumane confinement and just be allowed to be pigs.

As with our cows, we don't control what happens to the pig prior to its arrival and we generally do not breed them anymore here on the farm. Our pigs are given Certified Non-GMO feed from Tucker Milling. We do not feed our pigs corn or soy which will result in a leaner pig especially in combination with the natural exercise they get on pasture. They are rotated on new pastures before their rooting becomes damage to the grassland. Our property has a significant amount of oak trees and the pigs love to devour the acorns which only adds to the exquisite flavor of the meat. (They go absolutely nuts for acorns!) Our pork is well worth the wait in the extra time it takes to grow them out naturally. Best sausage and ribs in town!